Top 10 Centers of All Time

The reasoning behind Kareem Abdul Jabbar as the best center of all time is simple, he scored the most points in NBA history over a 20 year span and won himself 6 championships. He was the creator of the sky hook and brought the era of post playing centers into play.

The difference between Bill Russell and Wilt Chamberlin hinges on what you find more valuable, stats or winning. Winning is the goal of all sports which is why Russell is ahead of Wilt in these rankings despite the difference in per game stats. 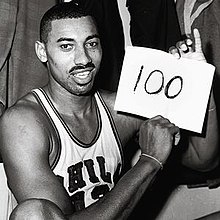 Many people may be surprised that Russell was ranked above Wilt on this list, but at the end of the day 11 championships to just 2 was enough for stats to mean much less. Wilt was still an amazing player and a top 3 center of all time, he broke countless records that stand today including his 100 point performance.

Shaq was one of the most dominant players in NBA and to this day is seen by some as the one that caried kobe to his first 3 NBA championships. Shaq is of course a top five Center in NBA history and is considered by some as one of the best players of all time.

One of the best shot blockers and defensive centers of all time, Olajuwon is a tier below the players above, but is still one that will be remembered as a legendary center on both ends of the floor.

Malone played in both the ABA and the NBA and played for 9 total teams, he was an amazing player on the offensive glass and was the epitome of a true center.

Ewing is often underrated due to the lack of an NBA championship, but playing in the same conference as Michael Jordan will do that to anyone, he was a force on both ends of the floor and was completely responsible for the Knicks success in the 1990’s.

Accolades: 11 All Star appearances, 7 time All NBA, 3 time All Defene, Rookie of the year

The reason Robinson is belwo Ewing is because without Tim Duncan beside him he failed to deliver, he was an amazing defensive center for the Spurs and was a part of the beginning of their dynasty.

Accolades: 1 NBA MVP, 10 All Star appearances, 10 time All NBA, 8 time All Defense, Defensive player of the Year, Rookie of the Year

Dikembe Mutombo was a defensive superstar, and while his offense was not as great as some of the names before him he still belongs on this list because he was one of the best defensive players in history.

Accolades: 8 All Star appearances, 3 time All NBA, 4 time Defensive player of the year, 6 time All Defense

Mikan was the first great center of the NBA, and for that reason he caps this list. Every center on this list played after Mikan who was truly the Center that created all others. Mikan brought glory to the Lakers before they were even in LA, and even played in 3 different leagues.

Accolades: 7 Championships (4 in the NBA), 4 All Star appearances, 6 time All NBA